Rubiales and the ambitious coin.

Here is a video download of a trick by my friend, the great spanish magician Rubiales. It has english subtitles so it's a good oportunity to discover this wonderful magician to the non-spanish people. Enjoy it!

Review and "My ACAAN"

The guys of Wizard Product Review talks about "A Book in Enlgish", and they do a great performance of one of my tricks included in the book: "Never tell them what's going to happen (My ACAAN)". Ckeck it at minute 11 here:

The last weeks I've been so busy, working hard in the famous MAGIALDIA magic festival, and in Toledo Ilusion, another festival I make in Toledo, my city.

In while, A Book in Enñgish is yet the #1 in the books topsellers and a great review has been published by Steve Bryant in his "Little Egypt Magic" web page: http://littleegyptmagic.com/magic.html

Thank you Steve and... ok. you're right: James Gardner is Maverick XD
Posted by Woody Aragón at 2:30 AM 1 comment:

These last days before departing to work in MAGIALDIA, I'm building my new lecture, based on the unpublished contents in "A Book in English".

I'll lecure it first time next 23 sept, in "Toledo Ilusión" festival. And my feelings are so strange... In one hand I'm happy to explain for first time the method of some of my main material (for instance, the "Human Scale" routine I posted before), but, in the other hand, I feel a little selfish and I want to close guard the secrets and the details for me... But I know it's good to "let go" your children to let them grow so... it's time!
Posted by Woody Aragón at 2:44 AM 2 comments:

A Book in Spanish

In the previous post, Juan Tamariz talks about one of their favourites routines of mine: The Human Scale. I apologize it's in spanish (it was a performance in Madrid) but I share with you this video doing the trick. It's a little long but it's worth so you can watch the feelings and the reactions it produces in the audience.

It's one of the routines you can find in "A Book in English". I hope you'll enjoy it!!

Foreword to "A Book in English" by Juan Tamariz

As I told you, I will share with you some parts of the book. I can't begin with no other thing but the foreword that Juan Tamariz wrote for me (para mis hispano-lectores pronto publicaré la versión en castellano, donde se pueden apreciar al 100% los divertidísimos juegos de palabras tamaricianos). I'm grateful to Juan for his kind words! 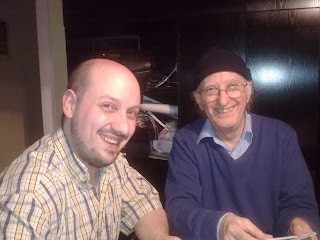 Nobody's Fool!(1)
By Juan Tamariz
When you meet Woody, the first thing that you notice is... his head! That's because, believe me, Woody has a big, beautiful, round head. And because of that head, his magic is full, saturated with intelligence, originality, creativity, intensity... He uses his head! And he presents his magic with beautiful scripts (emitted incessantly and with dizzying speed by the lips that Woody has ... in his head!) that are full of intelligence, that aim for the maximum magical impact, the maximum sense of impossibility.
And it is a brilliant head. Whatever angle you look at it from, his head shines. Because his ideas are as bright as he is bald. He has a big, shiny bald head. Shinier than the other bald heads (that so many men try to achieve by daily shavings). It shines brighter than the rest because (and this is a secret, the first one in this book) Woody hides under his skin millions and millions of neurons engaged in constant electrical and contemplative activity. Woody has always surprised me and I admire the constant flow of ideas that, if you look carefully from above, you can see moving under his scalp. Ideas for incredibly practical sleights (his “Separagon”), ideas for effects, methods (the genius of  his  “Human  Scale”, a version worthy of a  standing  ovation, which I have seen many audiences give Woody as they are amazed and full of wonder after seeing him perform it) and ideas for the structures of acts and shows (his marvelous “Summary Suite” at the end of his one man card magic theater show is full of surprises, drama, and magic, all building in intensity: a genuine artistic discovery.)
And everything, or almost everything, comes from... his head! A metaphorical billiard ball (the rigorous geometry and internal harmony of his tricks and routines live up to the comparison); a symbolic “egg” shape, an egg that spawns life as the artist Woody, or should I say, Woody’s head maintains a constant and joyous creativity (isn't “creating” what brings an artist closer to the Gods?).
Because that head in just a few years had shed what separated it from life (its hair), it is always brainstorming, and this is the second secret in this book, there is a hidden “b” in describing him as a bald man, it disguises the constant boiling state of the millions and millions of neural synapses. No one knows whether it’s a state of tremendous joy or brotherly merrymaking but, I'm sure that it is constant and almost driven, crazy thinking.
And some of that activity, a “something” full of suggestions, ideas, brilliant effects (the light), rigorous and at times mathematical (the billiard ball) and beautifully created (“egg-shaped”) has been poured into this book just for you. And I strongly advise you to enjoy it, just like I enjoyed watching, experiencing and applauding some (many) of them (others, I've only had the pleasure of having Woody explain them to me, but I never lose the hope of one day seeing them performed live in front of me).
But that's not all. Woody has a special gift that allows him to be liked by everyone (Woody is such a nice guy!); and he's always bursting with energy (both on and offstage). And the pleasure he gets from performing magic is absolutely contagious, and makes us happy with his happiness.


Woody has already established his value as a magician, but he's also a rising star. His youth has almost peaked, and for the next 70 or 80 years we will have plenty of Woody's creativity, wit, energy and Magic. I am sure of this because of his enthusiasm, his work, his efforts and his undeniable intelligence.
This is, then, my “summary”: Every time a better artist, a great person and nobody's fool!
Juan Tamariz, 2011
(1) The original Spanish title, “Ni un pelo de tonto”, literally means “Not a single hair of silliness”. This is a Spanish saying used to depict an intelligent person. Unfortunately, the clever links between the saying and the references to Woody's head were lost in translation.
Posted by Woody Aragón at 3:48 AM 2 comments:

A Book in English

Two weeks ago, my first book in English, named "A Book in English" (and that's the origin of the name of this blog... how original I am!) was released. It have received very good comments and reviews, and I'm very proud: The book has become #1 in the top sellers book list of Murphy's Magic Supplies, the wholesaler, for the last 14 days. http://www.murphysmagic.com/TopSellerLast14.aspx

Also, the book is in #23 position of the top sellers books in the last 6 months. Thinking about "A Book in English" has been for sale just 2 weeks at the moment, I can't be happier!

In next posts I'll tell you some anecdotes about the book, and I'll try to upload some contents and videos of the tricks. At the moment, I share with you the ad designed to publish in Genii and other main magic magazines. 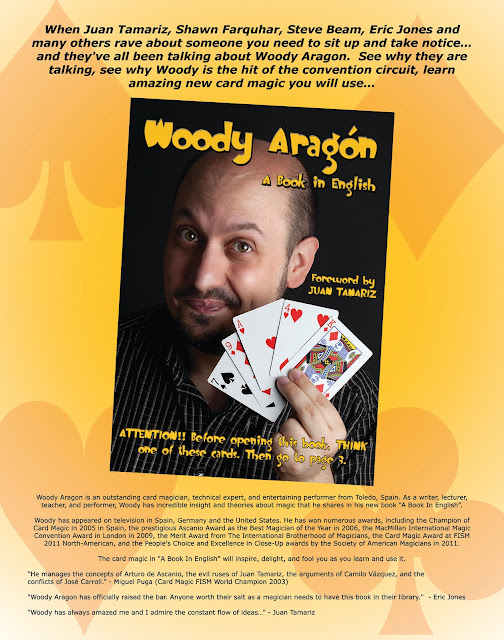 Welcome to the blog!

When I perform for a non-spanish audience of magicians, I usually start saying "Sorry about my bad English... I've learned it in Lennart Green's videos". This joke make people laugh (because every magician remember the first videos by Lennart, with their broken Enlgish. I must admit he has improved his English very much after that but... I can't waste a joke!). But also, it presents me in my condition of spanglish speaker.

Obviously I need to practice, and I think to write a blog in English (well, in my "English") it's a wonderful way. Anyway, I'll publish some posts in spanish, to my spanish friends. So, let's go!
Posted by Woody Aragón at 2:25 AM 2 comments: